Projects on the go.

Projects on the go.

As a complementary discussion to the "bucket list" and "€10k" threads, how about describing some of the projects - little or large - that you're actively working on at the moment, even if it's only in fits and starts.

I've mentioned elsewhere that I'm currently upgrading my camper's solar installation and 230V off-grid capabilities, and some of the lessons learnt during that small-scale project will be applied to the much bigger "power station" project coming soon-ish to a roof over me.

In parallel, I'm now closer to the end of my garden re-landscaping than the beginning. Although there's still quite a bit to be done, the new vegetable beds are all in service this year, and yielding results (some much better than expected).

But seeing as it's just too dang hot to be working in the garden this week, myself and the Prodigal Son have opted to do some gentle demolition in the shade instead. This is my "chicken shed" retirement home in the making: 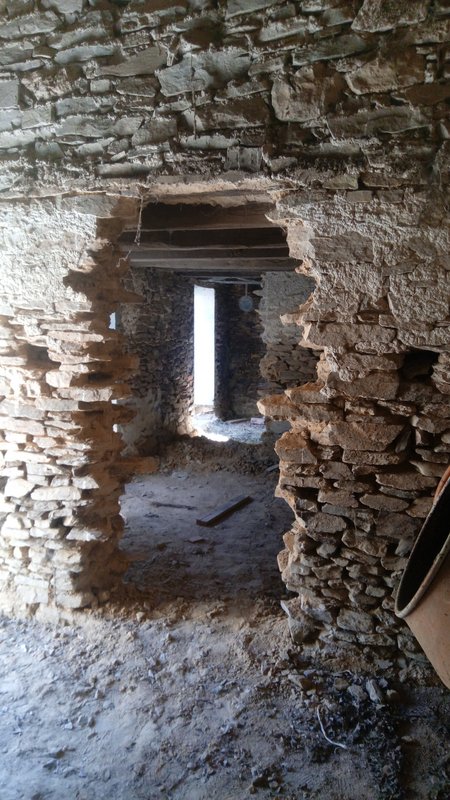 This was a "bonus building" that came with the house, in the sense that we could see the outside walls when we visited, but couldn't get up close to it on account of a forest of brambles in the courtyard onto which all the doors opened. The estate agent dismissed that whole part of the property as "a yard and some sheds ..." and we were happy to settle for the house and four barns that we could see.

It was, for us, a real Wowww! when we cleared all those brambles to reveal a traditional French farmhouse's "basse cour" including chicken shed (complete with perches), rabbit hutches, two pig-sties, a food preparation area (for the animals) and a few other sheds. More to the point, the footprint of the "cottage" - the chicken shed and two adjacent rooms - was bigger than the house in England we'd just sold!

The children used to use the sheds as variations on the theme of "playhouse"/"dungeon"/art studio, and one day Youngest Daughter suggested that it'd make a fine retirement home for Granny (coz she's so small she wouldn't have to bend down to get through the door). Well, here we are, nearly twenty years later and it's now officially A Plan to make it my retirement home. So we've broken through the walls to make it a three-room dwelling with bathroom, dug out the floors for extra head-height, and I've started buying the materials necessary to get started on the real renovation work.

It's intended to be an almost zero-energy building, and about as off-grid as it can be. So at moment, the courtyard is full of insulation; I have a load of plasterboard being deliverd next week, and I'm making up a wish-list of components for the underfloor heating. I'm hoping I can get a delivery of ready-mix concrete for the floors by the end of this month and have the walls done by mid September. Then the floor can dry out while I'm away dancing and walking in October.

You do realise that you have broken a doorway through a wall, formed an ope and now have no overhead support lintel. I hate to piss on your cornflakes, but thats a recipe for disaster.
You should have formed holes in the wall, put in supports with screwjacks to support the wall over head, removed enough stonework to place in a concrete or steel lintel. And made good.

Its no wonder that serious accidents happen on diy projects. I cant look at anymore, I'm off.

Reminds me of o reillys men in fawlty towers, you are now in the same position.

kadman wrote: ↑Thu Aug 04, 2022 11:19 pm You do realise that you have broken a doorway through a wall, formed an ope and now have no overhead support lintel. I hate to piss on your cornflakes, but thats a recipe for disaster.

The situation in real life is not quite what it looks like in the photo, mainly because you can't see the two lintels that are there (and why the opening was made in that precise spot).

The situation in real life is not quite what it looks like in the photo, mainly because you can't see the two lintels that are there (and why the opening was made in that precise spot).

Better pictures, or they dont exist

In 1966 my grandfather wrote his memoirs of growing up in Irish village 1890 - 1904. The original manuscript was lost. But I managed to track a copy of same that eventually made its way to me. So it is now up on Amazon as was cheapest way to circulate copies to his descendants. Kept other half busy while awaiting the start of the footie season!
Top

Currently my projects to do are rough bowl turning , and refurbish the calipers on the Iveco cherrypicker.

Rough turning first, 6 ash bowls 18" diameter and 9" deep.
Chickens will be happy with the new bedding.

Most of the projects I'd like to be doing are held up due to lack of time / money. Today and for the next few weekends myself and brother are improving the cattle handling area for my neighbour ( paid job ) involves replacing a crush gate with one that will be made specially by the brother. The rising in height of barriers due to some cattle being able to jump over and escape when they exit the crush. Replacing gates and putting in new gate posts etc to replace ones that have rotted ( hasn't got a makeover in thirty years ) Make the area more safer for both animal and the man who works by himself mostly.

I will be actually putting back up a lentil that was knocked out by a loader in an internal roofless stable if i have time today. Lentil is fine just need to knock off the old concrete and concrete it back into place again so he can put a stable door on it if he ever gets into rearing calves again.
Top

Ncdjd2 wrote: ↑Sat Aug 06, 2022 8:51 amI will be actually putting back up a lentil that was knocked out by a loader in an internal roofless stable if i have time today.

A lentil, or a lintel?

Lentils (green) are this region's symbolic vegetable, but for all their cultural significance, I doubt anyone would get worried about the loss of one individual seed!

Don't particularly like them, myself - would definitely make more use of lintels than lentils in this house.

Lentils (green) are this region's symbolic vegetable, but for all their cultural significance, I doubt anyone would get worried about the loss of one individual seed!

Don't particularly like them, myself - would definitely make more use of lintels than lentils in this house.

Ffs I knew it was too good to be true that I spelled everything correctly.

Do up the Howard rotovator that I posted in the other thread. Replace the gearbox seal and fix up the old topper.
Replace the floor and sides in a tractor trailer that currently has loose sheets of galvanise for the floor. This is never on the road in case Kadman spits out his coffee reading this.

Now that i am back at the lathe, i cant get away from it. I ressurected an old bit of sycamore that I had discarded a few years ago, and now that i have endless supplies of clear cast resin, I have turned the platter and will fill in the missing with coloured resin.

Sorry for thr picture quality, but I am more concerned with turning than photography at the moment

Playtime over now, i best go and do some real work. This is the last one for today...
!8" platter turned in sycamore. A nice underated timber, and nice to turn. I used to supply craftshops many moons ago. But it was a sale or return arrangement as many would not pay up front. More often than not unscrupulous shop owners would say they were stolen, and would not pay. Bastards, so I gave that up, too many pieces went missing.
Largest piece I turned in a platter was over 36" diameter in copper beech

kadman wrote: ↑Sat Aug 06, 2022 11:42 am Sorry for thr picture quality, but I am more concerned with turning than photography at the moment

I never quite know whether to be impressed by or disparaging of YouTubers who somehow seem to manage to both "do stuff" and record (and edit/upload) videos of themselves doing said stuff. Like you, when I take it into my head to attack a project, I'm generally more concerned with getting it done rather than taking pictures.

That said, I have been making more of an effort lately to at least take some "before" photos so that miscellaneous third parties can appreciate the "after" situation ... although the work is usually well under way before I remember that I'd meant to take a "before" pic.

(I did remember to take photos of my lintels for you, only now I've forgotten where I left the phone, and last time I had it, I'd set the ringer to silent so it'll be a question of waiting now till it turns up. Just hope it's not buried in the floor I've just blinded.

Never let it be said that Kadman only posts his success stories.
Here is a pic of a catastrophic wood turning failure. Any turners among you will recognize this type of occurrence only too quickly.
Eye off the ball for a second....and boom, all your work and nice timber down the swanee.
But not a single wood turner was harmed in the making of this picture, except for my unblemished recent record of no mishaps.

You don't see that on YouTube. Failures are sometimes just as interesting as successes.
Top

Reason it happened is because I was turning large bowls prior to this one and all the bowl gouges in use at the time were the large long handled heavy duty ones, suitable for big work. I then switched over to turning the little bowl. On the final inner cut I reached for the big gouge because the small bowl gouge was in the tool press.


Hey presto......BOOM.
Good thing I didn't U Tube it because I was swearing like a navvy when it happened.

Return to “The Smoking Room”